Home
Children Story
Short Story “Unity is the Strength” for Children, moral story for kids in English for competition with moral values.

Once upon a time a strange bird lived by the side of a river. His name was Parundam. He had two heads and one stomach.
For the two heads there were two mouths one for each one.
One day the bird was wandering for his food. After a long time he got a prey. It was very happy.
The first mouth was about to eat the full prey. The second mouth stopped the first mouth and demanded half of the prey.
“I will not give you anything,” said the first mouth and ate all the prey.
The other mouth got angry. In order to take revenge, it decided to do one thing. It searched and gulped the poison it found.
“Though the mouths are two, the stomach is only one…The same stomach…it not it?”
So the poison spread all over the body. The strange bird died.
So, unity is the strength.
Tweet Pin It 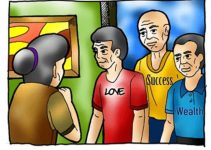