Home
Precis Writing
Precis-Writing Solved Exercise on the Title “The Knight Templar” for Students of Class 9, 10 and 12 Exams.

His dress was so what like that of his companion, but being scarlet showed that he was not a monk, but a soldier who fought for Church and his religion. On the right shoulder of his cloak was a cross, showing that he belonged to the Order of Knights. Templars, gentlemen who spent their lives in what they considered holy wars against those who were not of their own faith! (Sir Walter Scott.)

His scarlet dress, with the cross on his right shoulder, showed that he was not a monk like his companion but a Knight Templar who fought in the crusades! 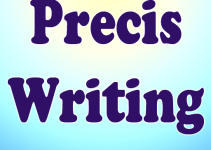