Once there was a boy called Pat who had a habit of laughing at every small thing. One day, he went to a bank with his mother. When she was depositing money, three robbers entered the bank. They opened fire.

All the people in the bank got scared. Suddenly, Pat started laughing loudly. The robbers thought that there must be some trap laid for them in the bank. Their minds got distracted and in the meantime, the guards overpowered them.

The robbers were handed over to the cops. Everybody praised Pat. When his mother asked him that why he laughed, he replied, “The mole on one of the robber’s face was very funny.” 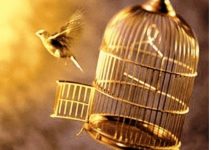