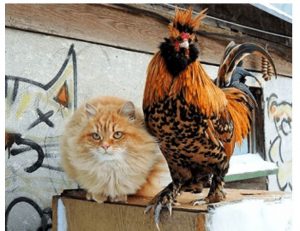 Once upon a time in Africa, roosters ruled cats. The cats worked hard all day and at night they had to bring all they had gathered for the roosters. The king of the roosters would take all the food for himself and for the other roosters.

The roosters loved to eat ants. Thus, every cat had a purse hung round its neck, which is filled with ants for the king of the roosters. The cats did not like the situation. They wanted to rid themselves of the king so that the food they gathered through hard work and great difficulty would be their own. But they were afraid of the roosters.

The roosters had told the cats that rooster’s combs were made out of the fire and that the fire of their combs would burn anyone who disobeyed them! The cats believed them and therefore worked from early morning until night for the roosters.

One night, the fire on the house of Mrs. Cat went out. She told her kitten, Fluffy, to bring some fire from Mr. Rooster’s house. When Fluffy went into the house of the rooster, she saw that Mr. Rooster was fast asleep, his stomach swollen with the ants he had eaten. The kitten was afraid to wake the rooster, so she returned home empty-handed and told her mother what had happened.

Mrs. Cat said, “Now that the rooster is asleep, gather some dry twigs and place them near his comb. As soon as the twigs catch fire, bring them home.”

At first, the king of the roosters became very angry and said to the cats; “I will burn all of your houses if you do not work for me!”

But the cats said, “Your comb is not made of fire. It is just the color of fire. We touched it when you were asleep. You lied to us.”

When the king of the roosters found out that the cats knew that he had lied to them, he ran away. Now, whenever roosters see a cat, they scurry away, because to this very day they are afraid of cats.