Once up a time there were three tigers. Daddy tiger, Mummy tiger and Baby tiger.
One day, Baby tiger turned to his parents, “I’m bored eating gazelles and antelopes. I want to eat something else.”
“What dear?” his mother asked.
“I want chocolate.”
“Chocolate!”
“Yes chocolate. I’ve heard it’s very nice.”
“Who told you that?”
“Nobody, I just heard it that’s all.”
“Have you been hanging about with those panthers again? I’ve told you about those panthers, they’re no good.”
“No it wasn’t from the panthers, I just heard it, that’s all. Can I have some chocolate?”
“I’ll ask your father when he gets in from hunting.”
Surprisingly Daddy tiger was all for going and getting some chocolate. “It would be good for our son to see a bit more of the jungle,” he replied.
“Where do we get chocolate then? Mother tiger asked.
“Well there’s a shop on the edge of the jungle. They’ve got all sorts of things and they’re bound to have chocolate.”
“All right,” mother replied in a way that would have been cagily, except she didn’t like cages.
The three tigers walked to the edge of the jungle to where there was a shop.
“How do we get the chocolate?” Baby tiger asked.
“Go in and get it.” Daddy tiger said. He walked up to the shop and the doors slid open. Suddenly there were screams of “Tiger” and “Help” and ‘Oh No” and all the humans ran out of the shop via the back door.
Daddy tiger walked back out the front of the shop now, “I think we can get some stuff now all the people have kindly left.”
“Where’s the chocolate?” Baby tiger asked as they entered the shop.
“Over here. I think.” Mummy tiger replied looking at a counter.
But baby tiger was no longer listening. He had found a trolley.
“Push me, push me, push me,” he shouted jumping in.
“What are all these things?” Mummy tiger asked as she wandered round the shop.
“I don’t know.” Daddy tiger replied, beginning to push the trolley. “Just throw them into the trolley, we can sort it all out when we get home.”
So the three tigers ran round the shop throwing various things into the trolley, while Baby tiger roared as they skidded round the corners. Soon the trolley was full of stuff.
“What do we do now?” Mummy tiger asked.
Daddy tiger would have shrugged his shoulders in reply if he knew how to do it, but he said, “go up to the tills,” in reply.
The three tiger went up to the tills and Mummy tiger jumped onto the counter.
“Now what?” she asked.
“You open the tills and put something in it.”
“What sort of thing?”
“I don’t know, see what’s already in it?”
Mummy tiger then used her claws to try and open the till. It fell on the floor.
“Oops,” she said as piles of paper and round pieces of metal fell out.
“Well I don’t have any round pieces of metal,” Daddy tiger said.
“We could take some of the paper off the other things and leave them in the till.” Mummy suggested.
“Is this chocolate?” Baby tiger asked picking up a Twirl.
“I think so.” Daddy tiger replied.
“Why don’t we take the paper off the chocolate and put them in the till.” Baby suggested.
“Good idea,” Mummy tiger replied. So the three tigers started unwrapping chocolate bars, until they had two piles, one of chocolate and the other of paper.
“Right help me put the till back on the counter,” Daddy tiger said. So the two grownup tigers started tiger-handling the till back onto the counter. Meanwhile Baby tiger just stared at the slightly melting pile of chocolate.
“Here goes,” Baby tiger said and he buried his head in the chocolate. “YUK! Chocolate is horrible, I don’t like it.”
“Never mind son,” Mummy tiger said. “Remember we’re tigers and we eat gazelles and antelopes, not chocolate. Get back into the trolley we’ll push you back through the jungle.”
So Baby tiger sat on the front of the trolley with a saucepan on his head, while his two parents pushed him through the car park and to the edge of the jungle where the wheels of the trolley got stuck in the mud.
“We’ll just have to carry stuff from here.” Daddy tiger said.
So the three tigers unloaded the contents of the trolley, and struggled back to their tiger-home in the jungle.
“What do you want for tea?” Mummy tiger asked. “Gazelle or Antelope?”
“What about ice-cream?” Baby tiger replied, “I’ve heard that’s very nice.”
Tweet Pin It 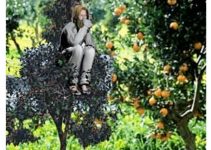