In a huge pond, there lived many fish. They were arrogant and never listened to anyone. In this pond, there also lived a kind-hearted crocodile.
He advised the fish, “It does not pay to be arrogant and overconfident. It could be your downfall.” But the fish never listened to him. “There is that crocodile, advising us again,” they would say.
One afternoon, the crocodile was resting beside a stone near the pond, when two fishermen stopped there to drink water.
The fishermen noticed that the pond had many fish. “Look! This pond is full of fish. Let’s come here tomorrow with our fishing net,” said one of them. “I am surprised we have not seen this place before!” exclaimed the other.
The crocodile heard all this. When the fishermen left, he slowly slipped into the pond and went straight to the fish. “You all had better leave this pond before dawn. Early morning those two fishermen are going to come to this pond with their net,” warned the crocodile.
But the fish just laughed and said, “There have been many fishermen who have tried to catch us. These two are not going to catch us either. Do not you worry about us, Mr. Crocodile,” they said in a mocking voice.
The next morning, the fishermen came and threw their net in the pond. The nets were big and strong. Very soon all the fish were caught. “If only we had listened to Mr. Crocodile. He had only wanted to help. For our arrogance we have to pay with our lives,” said the fish.
The fishermen took the foolish fish to the market and sold them for a good profit.
Tweet Pin It 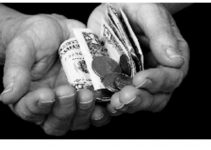