The Illusion of Reflection 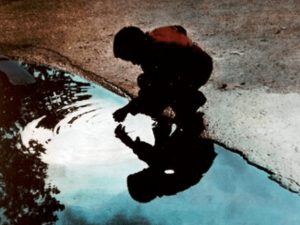 Once there was a king who had presented his daughter, the princess, with a beautiful diamond necklace. The necklace was stolen and his people in the kingdom searched everywhere but could not find it. Some said a bird might have stolen it. The king then asked them all to search for it and put a reward for $50,000 for anyone who found it.

One day a clerk was walking home along a river next to an industrial area. This river was completely polluted, filthy, and smelly. As he was walking, the clerk saw a shimmering in the river and when he looked, he saw the diamond necklace. He decided to try and catch it so that he could get the $50,000 reward. He put his hand in the filthy, dirty river and grabbed at the necklace, but somehow missed it and didn’t catch it. He took his hand out and looked again and the necklace was still there. He tried again, this time he walked in the river and dirtied his pants in the filthy river, and put his whole arm in to catch the necklace. But strangely, he still missed the necklace! He came out and started walking away, feeling depressed.

Then again he saw the necklace, right there. This time he was determined to get it, no matter what. He decided to plunge into the river, although it was a disgusting thing to do as the river was polluted, and his whole body would become filthy. He plunged in, and searched everywhere for the necklace, and yet he failed. This time he was really bewildered and came out feeling very depressed that he could not get the necklace that would get him $50,000.

Just then a saint who was walking by saw him and asked him what was the matter. The clerk didn’t want to share the secret with the saint, thinking the saint might take the necklace for himself, so he refused to tell the saint anything. But the saint could see this man was troubled and being compassionate, again asked the clerk to tell him the problem and promised that he would not tell anyone about it. The clerk mustered some courage and decided to put some faith in the saint. He told the saint about the necklace and how he tried and tried to catch it but kept failing. The saint then told him that perhaps he should try looking upward, toward the branches of the tree, instead of in the filthy river. The clerk looked up and true enough, the necklace was dangling on the branch of a tree. He had been trying to capture a mere reflection of the real necklace all this time.

Material happiness is just like the filthy, polluted river; because it is a mere reflection of the TRUE happiness in the spiritual world.

We can never achieve the happiness we are looking for no matter how hard we endeavor in material life. Instead, we should look upwards, toward God, who is the source of real happiness, and stop chasing after the reflection of this happiness in the material world. This spiritual happiness is the only thing that can satisfy us completely.