One day, Peter’s father gave him money to buy a clock from the market. So, he went to a showroom and bought a beautiful clock. When he got back home, it was 12 o’clock in the afternoon. So, one hand of the clock was over the other.

The whole family including Peter thought that the shopkeeper had given him a defective piece. So, he went to the shop for replacement. By that time, two hands had been separated and were visible.

When Peter realized his folly, he felt embarrassed and returned home.

When his family members came to know about their foolishness, they also felt very embarrassed. 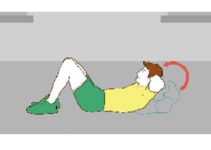