Home
Moral Story
English Short, Moral Story “The Camel and the Jackal” for Kids and Children for Class 5, 6, 7, 8, 9, 10, competition with moral values.

The Camel and the Jackal

A camel and a jackal lived together in a jungle. On the other side of the river flowing beside that jungle, there were fields having ripe sugar- canes

One day the jackal came to the camel with a plan to cross the river and enjoy the sugarcane. As he did not know how to swim, so he requested the camel to carry him on his back.

The camel agreed to the jackal’s request. They set out for the river and soon reached It’s bank. The camel carried the jackal on his back and crossed the river. On reaching the other side, they began to eat the sugarcane.

The jackal was soon satisfied but the camel was yet hungry. The jackal began to howl loudly. The camel asked him not to do so but the jackal said that it was his habit to howl after meals.

His howling attracted the attention of the farmers. They all reached the spot with long sticks. The jackal disappeared in a bush but the camel was badly beaten.

The camel agreed to do so since he wanted to retaliate upon him. When the camel reached the middle of water, he began to roll in the water. The jackal told him not to do so. But the camel said that it was his habit to do so after meals.

As a result, the jackal slipped off the camel’s back and fell into the deep water. He was soon drowned. He was rightly punished for his mischievousness.

As you sow, so shall you reap 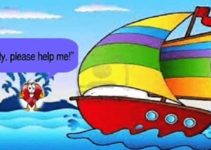