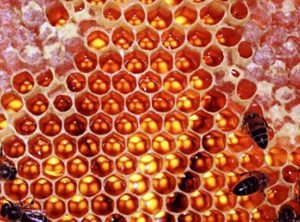 Once a man saw in his dream, that a lion was chasing him. The man ran to a tree, climbed on to it and sat on a branch. He looked down and saw that the lion was still there waiting for him.

The man then looked to his side where the branch he was sitting on was attached to the tree and saw that two rats were circling around and eating the branch. One rat was black and the other one was white. The branch would fall on the ground very soon.

The man then looked below again with fear and discovered that a big black snake had come & settled directly under him. Snake opened its mouth right under the man so that he will fall into it.

The man then looked up to see if there was anything that he could hold on to. He saw another branch with a honeycomb. Drops of honey falling from it.

The man wanted to taste one of the drops. So, he put his tongue out and tasted one of the fallen drops of honey. The honey was amazing in taste. So, he wanted to taste another drop. As he did, he got lost into the honey sweetness.

Meanwhile, he forgot about the two rats eating his branch away, the lion on the ground and the snake that is sitting right under him. After a while, he woke up from his sleep.

To get the meaning behind this dream, the man went to a pious scholar of Islam. The scholar said, the lion you saw is your death. It always chases you and goes wherever you go.

The two rats, one black and one white, are the night and the day. Black one is the night and the white one is the day. They circle around, coming one after another, to eat your time as they take you closer to death. The big black snake with a dark mouth is your grave. It’s there, just waiting for you to fall into it. The honeycomb is this world and the sweet honey is the luxuries of this world. We like to taste a drop of the luxuries of this world but it’s very sweet. Then we taste another drop and yet another.