Home
Moral Story
English Short, Moral Story “Half of the Profit” for Kids and Children for Class 5, 6, 7, 8, 9, 10, competition with moral values.

Half of the Profit

A rich man wanted to give a great feast to his friends. He got all kinds of dishes prepared but he could not get fish. He offered a reward to the man who would bring it.

After some time a fisherman brought a big fish. But the gate keeper would not let him in till he had promised to give him half the reward.

The fisherman agreed. The rich man was highly pleased and wanted to give him a lot of money, but the fisherman refused to take it. Instead, he demanded a hundred lashes on his back. All were surprised.

At last the rich man ordered a servant to give him a hundred lashes. When the fisherman had received fifty, he asked them to stop as he had a partner in the business.

It was the gate keeper. The rich man understood the whole thing. He was given the remaining fifty lashes dismissed from the service. The rich man gave the fisherman a handsome reward. 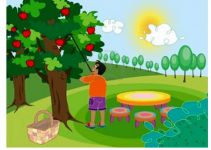