Home
Children Story
Short Story “The Donkey and The Horse” for Children, moral story for kids in English for competition with moral values.

The Donkey and The Horse

Once, there lived a washer man named Bheema. He had a donkey and a horse. The donkey carried clothes to the pond and back to his house. The horse carried Bheema to the market and back, occasionally. The donkey worked much harder than the horse.
On a bright sunny day, Bheema was going to the pond with donkey. He took the horse along to give it a drink of water. The donkey was carrying a heavy load of clothes. The horse was carrying nothing. The load was unusually heavy and the donkey’s back was hurting.
When the pain became unbearable the donkey said to the horse, “This load is too much for me, brother! Please take some of this load on your back.”
The horse replied some what rudely, “Eh! Why should I? I am here only to carry our master to the market.” The proud horse continued on his way. The day was getting hotter as the day went on. The donkey felt totally exhausted. He was almost dragging himself. “Humph! Humph!” The donkey tried to move. He just could not. The poor donkey collapsed to the ground. “Oh! What has happened to the poor donkey?” thought the washer man.
Immediately he took the load off the donkey. “Indeed the load is really very heavy. I should have been little more careful,” thought the washer man. Then he gave some water to the donkey. The donkey felt better now.
The washer man then picked up the bundle of clothes off the back of the donkey and placed it on the horse’s back. “Umf! Umf! Came the sound from the horse’s mouth. “I should have helped the donkey. I made a mistake. I should have taken half the load when the donkey requested me. Now I realize sharing a burden is easier.” The horse carried the heavy load of clothes for the remaining distance. There after both the donkey and the horse lived together.
Tweet Pin It 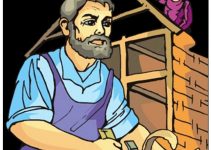