The Slave and the Lion

A rich man had a slave. The man was very cruel to him. So the slave became sick of his cruel treatment. He decided to run away from his master.

He got a chance and ran away to a forest. There he hid himself in a cave. As he lay there thinking, he heard the groaning of the lion.

He was frightened. As the lion came near, he saw that he was limping. The lion approached the slave and held out his paw.

The slave saw that his paw was swollen and a thorn was stuck in it. The slave drew out the thorn very gently. The lion was relieved of pain and went away. Afterwards they became friends.

By chance the slave was arrested by his master’s men. He was brought to his master who ordered his men to put him before a hungry lion. The day for punishment was fixed.

The people of the town were invited to see the wonderful fight. The lion was freed from the cage to pounce upon the slave when he recognized him.

He now advanced slowly towards him and began to lick his hands out of love. It was the same lion, his friend. The slave too, patted him.

It was a wonderful sight for the people. The lion was given to him as a reward. The slave was set free. 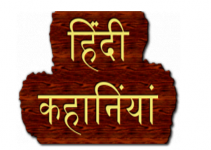