The Fruit of Experience

It’s a long time ago. Once a king went to the forest to play the prey. Running away after hunting ran away the king. Wandering wanders became the night. He showed light in a place far away, he rose to the side of the light. There was an elderly sitting in the cottage. The king asked the way with him and said what you do here. The elderly replied that I guarding the cultivator’s cultivation; In return, I get a paddy dough daily. The king felt that the old man must have a car, take it with him. The king said you will give me half a kilo of flour in a day with me. The elderly got ready. Both went to the palace. A room was given to the elderly. The elderly stayed there for a while. One day a horse trader came to sell horses. The king liked a horse very much, he thought that even the opinion of the elderly should be taken in it. He called the elderly and said, how is this horse. The elderly turned his hand over the horse’s body and told that the horse is very beautiful but the horse will sit in deep water. The king did not accept the advice of the elderly and bought the horse. After a few days, when the king was going hunting on the same horse, on the way, on a river, when the horse went into deep water, he sat down. The king remembered the elderly, he returned and called the elderly and asked how did you know that the horse will sit in deep water. The elderly told that when in the hands of the horse, I felt the heat in his liver and thought that the horse would sit in deep water. The king who wanted to know the reason for calling the merchant of the horse said the trader said that if the mother had died in this childhood as a child, then it was brought out by feeding buffalo milk, which has become hot in its liver.

Raja, happy with the experience of the elderly, gave him a loaf of flour and gave him in the reward. Now the elderly got three pots of flour daily. Once sitting, the king came to the mind that why should not ask about his queen from the elderly. The king called the elderly and said that you are a very experienced car, you tell me about my queen, the elderly said that you are the queen I can tell about the queen in a room and then sitting in a room. Raja did the same thing and the queen was seized and sat in a room. As soon as the elderly opened the door of the room, the queen ran away, the elderly came back and told the king that his queen seems to be the daughter of a Vaisya. Raja called her mother-in-law and asked her strictly, then she said that she had no children. For this, he had adopted this daughter with a whiz. The king asked the elderly, how did you know that the queen is the daughter of Vesha, the elderly replied, the content of any naked woman Ongoing, the woman hid her limbs and shrank, but the queen ran away from me. Raja, happy with the experience of the elderly, gave him flour and dalia in the reward. Now the elderly got a kilo of flour daily. One day, the king called the elderly and asked him, “Now tell me something about me.” The elderly said, “You are the son of a daughter-in-law.” Gassa also came to hear the King and was surprised. The king got up at the same time and went to his mother. Putting the sword on his neck said that mother is the son of truth in telling the truth, or else I will give my life. The mother was scared and told that her father used to stay outside the state’s work. There was a bookkeeper in that you were the child of the person. The king came from the elderly and asked how did you know that I am the son of Buniye then the elderly replied Did I tell you one thing of one million lakhs, and what did you put a paddy dough on it? This is to know that you are the son of Biniyo. The king was happy with the experience of the elderly and took the elderly to his Council of Ministers. 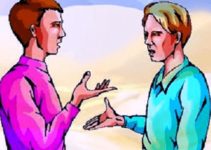